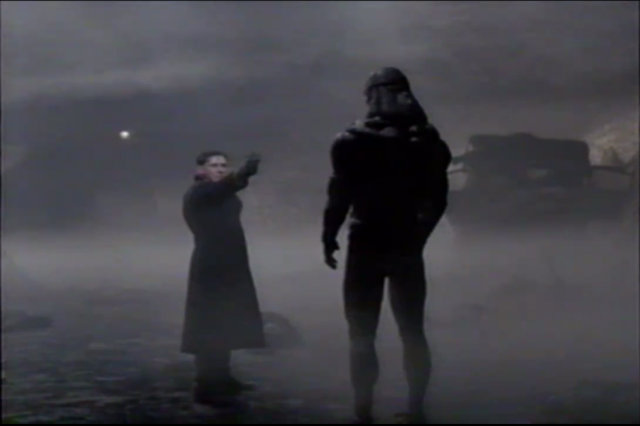 Well, I just finished Nightworld, the final book in F. Paul Wilson’s Adversary Cycle series, and what a journey it has been. I first read The Keep after watching the movie, and it soon became (and remains) my favorite novel ever. Almost a year later, I discovered the book had not one, but three sequels! Now I’ve worked my way through all of them, with the first still being the best, the two in the middle really just serving as build-up to the last one, and the last one is just incredible and a fantastic way to cap off this delightful series. So, I decided to watch the movie again just to completely cap everything off, and was delighted to find my thoughts on it haven’t changed a bit.

In 1941, the German Army takes control of an abandoned and ancient keep with nickel crosses embedded into its walls in the Dinu Pass in Romania. One greedy soldier accidentally releases an ancient evil residing within the keep while trying to pull one of the several crosses off a wall, and this force begins killing off the soldiers. A squad of Nazis is called in to take control, but find that even they cannot handle whatever has been released. They eventually call in Jewish professor Dr. Theodore Cuza (Ian McKellen) and his daughter Eva (Alberta Watson) to help them. Cuza discovers the monster that has been killing them off, and makes a pact with the creature. A mysterious man (Scott Glenn) also rides into town, and seems to know an awful lot about the keep and the evil residing within it. It all culminates in a final showdown in which the fate of the world hangs in the balance.

Before I discuss this movie, let’s start with a little background. This was director Michael Mann (Public Enemies, Heat)’s second theatrical movie, and he also wrote the screenplay. Mann initially turned in a three-hour long cut to Paramount, which was supposedly completely faithful to the book, but since this movie wasn’t a guaranteed success, the studio actually whittled it down to an astonishing 96 minutes. Due to this extreme case of studio interference, Mann has disowned this movie. Paramount has probably forgotten all about, and it’s all a real shame because this is one of the most underrated and overlooked horror movies not just of the eighties, but also of all time. If there was ever a time to take my opinion with a grain of salt, it is now.

With The Keep, the cinematography and the score are everything. They’re the two aspects that make this movie so memorable today and why it’s one of my all-time favorites. Michael Mann is just one of those guys who shouldn’t be doing anything but making movies, just based on his talent for setting up shots. No matter what action is taking place, Mann’s style throughout the movie is utterly impeccable. Then there’s the score by Tangerine Dream, who reached the height of their popularity during this time with movies like Risky Business, Legend, Miracle Mile, etc. The music for the movie is definitely of the love-it or hate-it variety. A lot of people complain the electronic score doesn’t cope well with the WWII setting, but I feel it does a fantastic job of building on the atmosphere, as well as contributing to the almost-childlike wonder and surrealism given off by a majority of the movie. Supposedly, copyright issues with the score are one of the reasons this still remains MIA on any digital format.

Another big help with its ultimate success is the wonderful cast. The movie does focus on a few more characters than the norm’, and while they were all expanded upon in great detail in the book (and, presumably, in the director’s cut), the characters in the movie wouldn’t be half as interesting as they are without the actors. Jurgen Prochnow is great as the sympathetic and sentimental captain of the German Army, and Gabriel Byrne is equally great as his rival Kaempffer, the major of the Nazis. The two actors work surprisingly well off each other, and they have some of the best character-driven scenes in the movie. Scott Glenn does a good job with what he’s given, as his character is almost completely emotionless. The best actor, in my opinion, is Ian McKellan. He doesn’t get to do a whole lot either, but his speech to the monster at the end gives me goosebumps every time I see. The weakest performer (although she’s by no means bad) is Alberta Watson. She does good job is most of her scenes, but her acting is a little dodgy at times.

While half of the movie is missing, I wouldn’t really call this a “bad” adaptation if the book. The scenes that survived Paramount’s editing rampage are pretty faithful to the book; there are just a lot of scenes missing. Mann does exercise his artistic license a lot regarding a lot of the details. The monster depicted in the movie is different than in the book, and I’m still on the fence as to which I prefer. Here, Molasar (the monster) goes through different stages of being as the slaughter progresses, from a cloud of smoke, to being only made of muscles and tendons, and finally, to his full form (which resembles a golem). The creature effects are very good, even if the mouth articulation wasn’t quite perfect. There’s also the change as to what the cross represents at the end. At first, I thought the change was incredibly stupid, but I’m starting to warm up to the decision (even though it’s VERY obvious a big chunk of film was cut out of the climax). If you haven’t read the book, the story can be really hard to follow, with important details that should have taken two or three scenes being packed into a few lines of dialogue with disappointing results. However, since I’ve read the book multiple times, I already pretty much know what’s going on, so that’s helpful.

The best way I can describe everything is this: The Keep isn’t a movie. The Keep is an experience. It’s impossible for anyone not to get taken in by the lush visuals and the fantastical score, and if you can ignore the choppy plot, you’re going to have a great time. While the novel was really more of a Gothic horror story (and the movie is to an extent), this is more of a fairy tale filled with the classic good versus evil scenario, a romance, engaging characters, and some exploding Nazi heads thrown in for good measure. Paramount was actually planning on releasing a barebones disc with only the theatrical cut in 2004, but thankfully, those plans got canned. Now, no news of any form of release has been given. In a dream world, this would be given the Blu-Ray treatment with both cuts intact and fully remastered, along with a slew of bonus features. But that’s just me dreaming. All I know is I will fight until the day I die to get this released in its uncut form. There was a really good HD master done of it for Netflix, which hints at a potential release, but nothing definite. I doubt the stingy execs at Paramount will sell the rights to it either, so the future does look bleak for The Keep. How sad.
The Keep is an aesthetically mesmerizing, if confusing, horror-fantasy that isn’t for everyone. My advice: Read the book. Watch the movie. Be disappointed. Keep watching the movie to see if you appreciate it more every time. Hey, it worked for me.