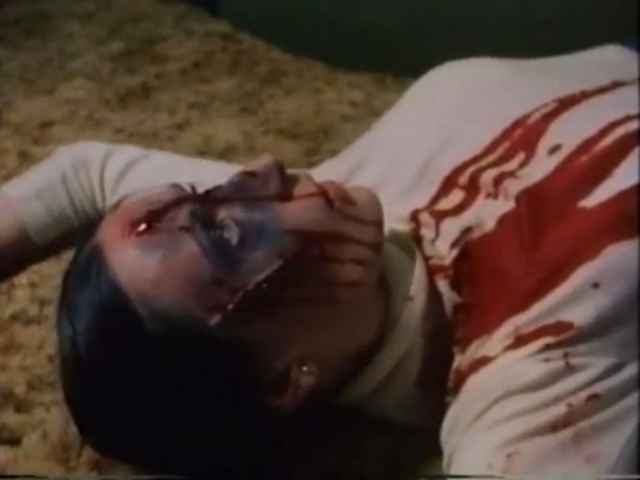 Truth be told, I’m not the biggest fan of Valentine’s Day, but hey, at least we got some pretty good Valentine’s-themed horror movies out of it! There still isn’t a slasher for every holiday (to my knowledge), but I feel we have enough Christmas, Valentine’s, and God knows how many Halloween movies to make up for it. The obvious films turning the day of love into the day of horror are the great ’81 slasher My Bloody Valentine, its decent remake, and the underappreciated 2001 slasher Valentine, but for this occasion, I’ve decided to review something not exactly “Valentine’s Day” themed, but it’s romantic enough.

Jeff (Paul Iwanski) goes out fishing one day, and when he returns for his cigarettes, he finds his wife, Elaine (Cheryl Black) getting frisky with Jeff’s buddy Vic (Bob Wagner). He attacks Vic, but Elaine knocks him out, and as he falls, he knocks a candle off a table, which lights the place up. Vic and Elaine leave him there to die, and one year later, they’ve opened up Honeymoon Island: the ultimate lover’s paradise. Three newlyweds boat out to the island for a weekend of bliss, but once they arrive, they find they aren’t the only ones on the island; someone is watching. Someone is waiting. Then the first scream is heard, and the honeymoon is over, for someone has returned to claim vengeance for a crime long thought buried…

Forgive me if this review’s a little vague, for I watched Honeymoon Horror a few days ago and I seem to be struggling to remember most of it. But that’s the kind of movie Honeymoon Horror is. If Creepshow and The Thing are classics of 1982, Alone in the Dark and The Slayer are underrated gems, and Island of Blood and Girls Nite Out are just cheesy fun, than this is the residue left in their trail. There’s nothing new or remotely original about it, and it’s not executed with any sort of style or even too much sense of fun. The only attraction to it is the great title, some alright murders, a crispy killer two years before Mr. Krueger made his big screen debut, and one entertaining character. Considering all the pickings from 1982, that really isn’t a whole lot.

Like other slashers from the eighties (particularly the latter part of the decade), Honeymoon Horror has a nasty and destructive habit of dilly-dallying around too much when there should be something more exciting going on. The opening set up the events to follow well, but after the murder of four women about fifteen minutes in (three of which are offscreen and one is pretty cool), we then get a thirty-minute gap until the next killing. Ordinarily that wouldn’t be too bad as long as the characters are fun and there are some suspenseful scenes going on as well. Nope. We get bickering lovers talking about things the audience doesn’t care about whatsoever (I can’t really point anything out because I don’t remember) and every so often, a POV shot of the killer peeking at some people through tree branches. Exciting stuff, this is. Heck, Iced almost had an hour gap between murders and it was still more entertaining because of the characters. Then the murders actually begin again, and despite more blood, it’s still pretty boring. And despite a final body count of 9, it feels a whole lot lower just because of how spread apart some are and a lot are either offscreen or just let-downs. The end goes on entirely too long as well.

So with all those negatives, what in the world is good about Honeymoon Horror? Like I said two or three of the murders were either nicely gory or nicely set up, even without too much originality behind them. The island is probably my favorite setting ever for horror movies, and while this doesn’t have the isolated atmosphere commonly associated with that setting, the thought is nice. There are some unintentionally funny parts like one of the characters who’s obsessed with weight-lifting (“Don’t you want your husband to be Mr. America?”), the killer’s distasteful fashion sense (rocking the khaki) and his “heavy breathing (sounds like he’s scuba diving in a sea of mucus)”, and the burned effect when he is revealed, which looks like he got a face full of oatmeal. However, the one reason I’m not simply tossing this aside is the presence of the stereotypical fat sheriff. He serves as the comic relief and his scenes are funny just because of how over-the-top they made him. When he gets a call saying there’s a fire on Honeymoon Island, he responds by taking a big bite out of his sandwich and complains about how he never gets any sleep around the office (he could if he were watching this movie…)! And there’s not one scene where he doesn’t have his stogie in his mouth, even when he’s eating. He pretty much steals all the scenes he’s in and I wish he was featured more prominently.

I really don’t have the heart (ha ha) to recommend Honeymoon Horror to anyone, but on the other hand, I’d feel a little guilty if I told you to avoid it. Sure, it does have its fun moments, but as a whole, it’s just way too talky to do anyone any good. The thought of a Honeymoon-themed slasher on an island is nice, yet the filmmakers load the movie up with mostly boring and forgettable characters, bad writing, little gore, no surprises, and hardly any redeeming qualities. The movie never really develops any of the couples besides the main ones who own the island, and they’re completely unlikable for obvious reasons. I would say just watch it for the sheriff, but why should you when we’ve also got some great fat sheriffs in much-better fare like House of Death or Silent Madness? This is another one only available on VHS, but it is rumored that rentals ofHoneymoon Horror earned Sony $22 million. It’s understandable, given the title and the artwork.
Despite the presence of some good-old early eighties hilarity and the presence of an ample-size sheriff, Honeymoon Horror really doesn’t succeed in doing anything special. Good for Valentine’s Day if you’re heartless and want to end your current relationship with a movie.