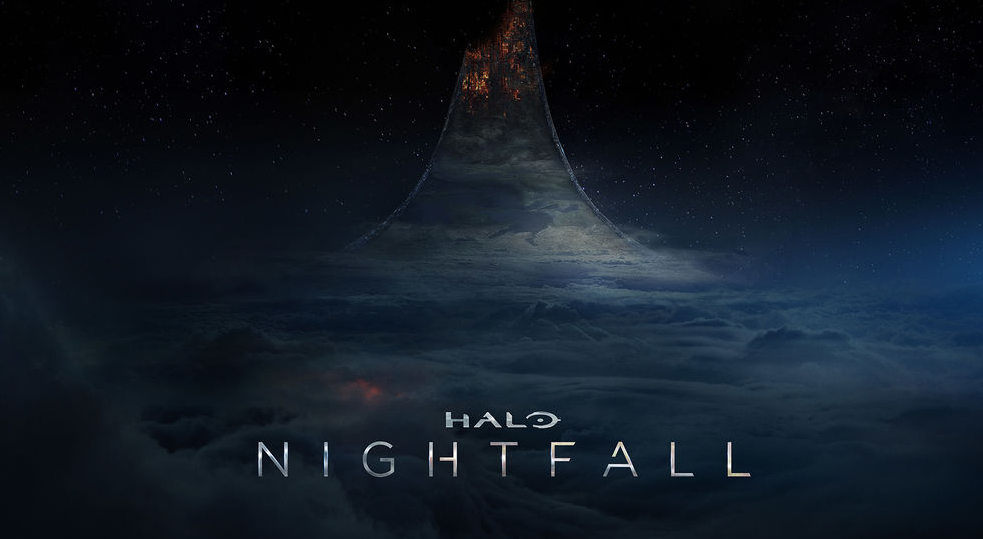 For those of you who recognize the title, Halo is a series of X Box games created by Bungie, now managed and developed by 343 Industries, an offshoot of Microsoft. It’s a first-person shooter set in a militaristic future where humans battle it out with an alien alliance called The Covenant. This was originally a five-episode webseries that ran on the Halo Channel, produced by Ridley Scott. It’s the origin story of Agent Locke, a second-tier character from Halo 5: Guardians. In the movie, Locke is played by Mike Colter, who has a handful of recognizable credits on IMDB.

The movie opens on a lone man in his living room, staring pensively at the setting sun through the window of his apartment. While he voiceovers about what it means to be a soldier, a little girl, presumably his daughter, takes his hand, and he kisses her forehead and picks her up. His careworn face is a sharp contrast to her young, fresh one, and they watch the sun continue to set while she chews on the beads of the necklace she’s wearing. It’s a very quiet, poignant moment.

Planet-side: A group of lightly-armored soldiers make their way through the trees. They work for ONI, the Office of Naval Intelligence, only they’re grumbling because there’s a tenuous peace in place due to a treaty having been signed, which means they’ve been relegated to shadowing a mysterious alien who’s carrying a package of some sort. A ship lands, and another alien emerges, one who belongs to The Covenant. There’s a hand-off, and the ONI guys give chase, only they lose the second alien, who makes his way to one of the planet’s major cities.They’re trying to catch him/it because they think a bomb is about to be detonated.

Locke corners the alien, but it drops the device, which goes off, emitting what appears to be an electrical charge that flows through the entire city. What they thought was a bomb turns out to be a bio-weapon of sorts, one that randomly compromises human DNA. Several people die, and then the soldier from the opening scene arrives to handle the interrogation of the alien they captured. His name is Aiken. The solider, not the alien.

Punch-punch-kick-tell-us-what-you-know. They end up discovering that they have to go to an off-limits planet to find the element that created the bio-weapon, where they’re supposed to blow up the deposits of it. One soldier in particular says it would be a major violation of the peace to do so. He looks a little like Gavin Rossdale. He has a video thing in a device on his arm of his kids telling him they love and miss him.

Once they land on the planet, they find two natives living in a cave, where they keep horses. One of them tells the soldiers to put down their weapons, but they take them prisoner instead. Brag-talk-brag. The horses start to get skittish. The party makes its way back to the ship, which is gradually being beset by what looks like over-sized worms, only they have little horns. The ship tries to take off so the worms can’t board, only that riles them and even more appear and start clogging up the jets. Kind of like birds getting sucked into airplane engines, only deliberately. The ship crashes.

It turns out that the tech the soldiers use attracts the worms through some kind of sonar. They should have listened to those other guys. Locke squishes one in his hand, and orange-ish goo comes out. What it comes down to is this – with the ship out of commission, they can’t get an SOS out, which means they can’t call for an extraction. There’s a tug somewhere close by, but its only a two-seater, and there’s nine of them. They have five hours until sunrise. Aiken says they’ll use lifeboat rules – no arguing about food, water, air. They’ll draw straws when they get to the tug to see who gets a seat. The race begins.

Long story short (too late!), order breaks down almost immediately. Another solider, Horrigan, says they should ditch the natives, and though Locke tries to shut him down Aiken hears him out, but it doesn’t really go anywhere. One of the natives is resentful of ONI because he came from another planet to mine the deposits they intend to blow up, since a drought that’s lasted for a hundred years has made people where he’s from desperate for food, so they come to the “hell world” there to make money.

Horrigan ends up shoving one of the natives out of their hiding place, and the worms get him. Horrigan’s a jackass. Locke tells him he doesn’t get to play God, and Horrigan snarls, “Look around. Do you see God anywhere?” So he’s a jackass, but he’s a jackass who sort of has a point.

It turns into a Survivor sort of thing, with mainly Horrigan trying to get people to “choose sides”, his meaning being that he wants someone to have his back so he can live. Another soldier takes away the Gavin Rossdale look-alike’s vid of his children and throws it down a ravine because the tech might attract the worms. Trudge-trek-trudge. They reach the chasm where the ship crashed, and the remaining female character (the worms got the other one when she was trying to retrieve her oxygen pack) says, “I thought we’d already reached the ninth circle of hell. Turns out there’s a bonus level.” Heh.

While they’re climbing down, the guy who had the video is starting to freak out a little, and the one who threw the device into the ravine slips off the ledge. After a moment of internal debate, the first guy lets the other one fall, then says, “It’s those kids. You understand, right?” More trudge-trek-trudge.

When they reach the bottom, Horrigan pulls a gun on Aiken, and Locke in turn trains his weapon on Horrigan. (Curse his inevitable betrayal!) The Gavin Rossdale look-alike, whose name turns out to be Ramos, sides with Horrigan, and they take all of the oxygen packs and the surviving native and scarper. They need him to pilot the tug, so he tries to get Ramos to turn on Horrigan, which seems like the safest bet because Horrigan’s kind of crazy.

Aiken, Locke, and Macer (the surviving female) end up drawing beads, because Aiken breaks the necklace his daughter was chewing on at the beginning. Locke and Macer draw white, Aiken draws red, which means its up to him to plant the nuke to blow up the deposits. Horrigan ends up shooting the other native when he tries to start the tug, and he and Ramos get eaten by the worms. Locke and Macer take the tug, there’s an explosion, and Aiken voiceovers again about soldiering and what it all means. The end.

Is this objectively a good movie? Not particularly. The standouts acting-wise are Colter and Steven Waddington, who plays Aiken, and they’re the best of a bad lot. The humans-stranded-on-an-alien-planet thing is a sci-fi stand-by that’s been done countless times, and done better than this. But there was something about this that drew me in, and so I give it a solid B. It’s available at Redbox and at Netflix DVD, and the original webseries may still be available on the Halo channel online.