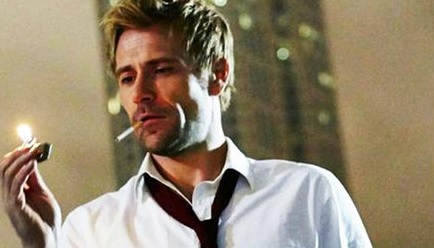 Whispers of a major television series based on the Hellblazer comics hit the web fairly early on in the series’ development and set hopes high for an adaptation loyal to the source material. The comic’s iconic antihero had already been put to film once before in the eponymous 2005 film starring Keanu Reeves, Rachel Weisz, and (god help us) Shia LeBouf, but the film had garnered much criticism for both straying from the source material in terms of storyline as well as in its depiction of John Constantine as dark-haired and lacking his signature trench coat. While the film, Constantine, worked well as a standalone, it wasn’t true enough to Hellblazer for fans to be satisfied with this one foray into multimedia, and there was great hope that the television series would prove a much better offering. 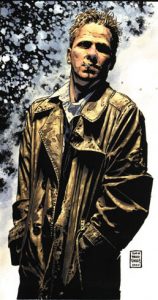 The series premiered on NBC in late October of 2014 with actor Matt Ryan (Criminal Minds: Suspect Behavior) cast in the lead role, with Harold Perrineau (LOST) and Charles Halford (True Detective, Agents of SHIELD) in supporting roles. Ryan brought to the role the affable if cynical snark that fans were hoping for, as well as the look and cunning more in line with the print version of John Constantine.
In spite of its style, there were grumblings about the series before it even aired. The character would be portrayed as a younger incarnation than is in use in the comic titles, disappointing many fans who had hoped to see their hero as is, rather than as he was. Furthermore, John Constantine is a noted chain-smoker in his comic renditions, and this nicotine habit was even used as a pivotal plot point in the less than faithful film adaption, but due to its placement on NBC, the cigarette habit was left up in the air. NBC seemed to find the idea of a lead character with a cigarette in his hand to be offensive and, to date, only two very brief glimpses have been made on the show of Constantine with a smoke in his hand.


More character slaughter was soon to come when it was revealed that Constantine, though portrayed in the comic series as openly bisexual, would most likely not have any same-sex dalliances during the series’ run. This struck one hell of a chord with the blogosphere, and the controversy grew when NBC executives went on the defense over the issue at Comic Com, going so far as to insinuate that an excited Hellblazer fan, who had posed an innocent question regarding sexuality on the series, was naught more than the stereotypical fake geek girl for not having encyclopedic knowledge of the comic’s timeline. It could not have come at worse time for the series; may potential crossover viewers in the WB’s Supernatural fanbase were turned off at the idea, after dealing with many years of blatant queer-baiting on their own favorite series. With Supernatural fan favorite Castiel having been created with inspiration from Hellblazer’s Constantine, there was huge potential for a wide crossover fan base, and this controversy struck a blow before the series even went to air.

Four episodes in and Constantine is already in trouble – and it is a damn shame. Matt Ryan shines in the title role, creating a likable and sarcastically charming presence that an audience would like to root for. Haunted by the accidental damnation of an innocent child, Constantine begins his network television journey receiving shock therapy, until the darker forces of the world break into his safety bubble of an asylum and draw him back into the fight between good and evil. With best friend Chas (Charles Halford) at his side and a map of supernatural hotspots in his pocket, Constantine is off on a journey to find out why the dark is creeping back out into the world. His travels soon add Zed (Angélica Celaya) to this motley crew, a powerful psychic with an artistic bend who had been dealing with visions of a stranger in a trench coat for months prior to his arrival.
The series is off with a horror-styled bang, featuring hunger demons doing reverse crab-walks in poor possessed butchers, face-slashing fashion model ghosts, voodoo masters, and even a demonic blues recording in the vein of the doomed musician Robert Johnson. But in spite of a lead-in from the popular fairy tale monster slayer series, Grimm, ratings for Constantine have never been off the charts and have been flagging since it premiered. Subjected to the never helpful 8 PM (7 PM Central) time slot, Constantine is already in real trouble of cancellation, particularly in a television climate that hasn’t been kind to horror since the days of The Twilight Zone.

So horror fans, why aren’t you watching? Fun, gory, and more than a little creepy, Constantine, in spite of its failings as an adaptation, could be fodder for a good long run of spooky primetime horror with stylized comic book flair that many of today’s horror geek crowd adore.
If you haven’t seen it yet, check your local listings and tune in to the next new episode. Horror deserves a place in major network television, and John Constantine deserves his due. Don’t let this one slip away.