Writer and actor extraordinaire, Dan Palmer joins me for a talk about his latest film; STALLED. Now, if you haven’t seen this British horror/comedy masterpiece yet, then I suggest you do so, sooner rather than later. Palmer plays a technician, called out to fix something in the ladies bathroom during a Christmas party, and well, also during the zombie apocalypse. He gets trapped in one of the stalls and makes numerous attempts to escape, whilst avoiding being eaten.

First off, how did you meet STALLED director Christian James? I know you both worked on FREAK OUT together.

Christian and I met a few years before at a, sorta, film school in Bournemouth. At the time it was one of the most prestigious in the country and it was kinda a big deal to get in. This was before the horror renaissance so I was getting snoooty looks for wearing my Texas Chainsaw T-shirt, but luckily CJ was of like mind. The average age of the course was 23 and we were both 16. Prodigies! So that was another reason we migrated towards one another.

Nice! So what inspired you to write the film? Why a toilet cubicle?

We’re by no means the first! Night of the Creeps, Deep Rising, Friday 13th; The New Beginning, the underrated Psycho III, Street Trash and of course Ghoulies all have really memorable crapper scenes. But I was surprised that no one had taken it one step further and attempted to set their entire film in the loo. But my original thought really stems from the universal vulnerability we feel when spending a penny. I am surprised it has taken so long for someone to make the leap from Psycho’s shower..
But there maybe an onslaught of bog-based B-movies now! I noticed there is a movie in production called ‘STALL’! Hahaa, good luck guys..

How was it shooting in such a small space?

For me it was fine. Kind of peaceful between takes; I could just sink back into the cubicle and stay way from the madness of a low-budget shoot. When it was time for the next set-up I could hide my Red Bull in the toilet bowl, rise back into shot and get back into zombie killing.
It was really Sashi Kissoon the DoP and Christian who were the ones facing the biggest challenge. I was simply playing a character stuck in that situation, they were the ones that had to make it look consistently interesting.

Haha sounds great for you! How do you feel about the film being compared to SHAUN OF THE DEAD, do you think of it in a good way?

There is both good sides and bad sides.
Firstly it is a compliment as the comparisons have mostly been positive, but as the marketing folks and the distributors have gone with Kim Newman’s lovely quote for the box art we get kicked in the teeth by the people that dislike the movie. As if Christian and I are strolling down the street shouting ‘We are Shaun of the Dead 2’!!!
One review actually said; I actually like this film but I am knocking a star off ‘cos they said it was liek Shaun and it isn’t!!!

Stalled is VERY different. Namely we had about a 1000th of the budget! Hahaha.. but also in tone. My character is intentionally flawed and quite unlikable at the outset, he is not the lovable dufus that Pegg’s character is.

That’s true. So when writing the film, who was your favourite character? Did it stay the same after watching the finished product?

Funnily enough, the character that Antonia Bernath plays, my female companion who is stuck alongside me in the restroom, was only in one scene initially. I enjoyed the back and forth so much and I really liked writing for her, so I embellished the role and she ended up being the female lead. So, I would say that character was the most fun to supply dialogue for. Incidentally I have only just remembered that there was, for a time, a THIRD character. A stoner stuck in an air-vent! You never saw him and just saw weed smoke puff through the grate! Hahaa..

Thats sounds awesome! Did you ever expect STALLED to gain such a positive reaction? Especially as it sold out three screenings at FrightFest.

Not really. I was hoping people would like it, obviously, but as it is such a little, contained film and such a low budget we thought it might just be this weird film that might show at an obscure festival and disappear. In fact there was chat very early on between our uber-producers Daniel Pickering and Rich Kerrigan about putting it online!

Hahaa. Me too! Don’t get me wrong, we all had faith in it but we weren’t sure we could compete with the big boys. Luckily we went for it and it paid off. Especially at FrightFest where a lot of people said it was their fave film of the weekend. Even though there were some pretty big studio movies showing. As well as sequels to successful flicks and movies by really established genre directors.

Most of the films you’ve been in and wrote for have huge elements of comedy, do you tend to watch more horror/comedies than other horror subgenres?

I love a Hostel or a Maniac when they come along but, yes I enjoy a horror/comedy too. I think it might just be a result of what I watched as a kid. Stuff like; Evil Dead II, Vamp, Gremlins, Night of the Creeps, Monster Squad and even the Freddy movies …they all had a hefty dose of humour.

So finally, whats next for you? Will you be working with Christian again soon?

Hopefully. We have a few things on the boil. Can’t go into specifics as yet but we have a couple of exciting things with the Stalled producers that maybe going ahead and other projects away from that camp, too. All with a horror element so there will be blood and boobs and bonkers-ness guaranteed no matter what we throw at ya next.

I know a few, that’s why I might have to donate a butt-shot!

Haha, now that i’ll be looking forward to!

Also, don’t forget you can pick up the DVD and BLU-RAY right now at ASDA and HMV! It’s got two commentaries and LOADS of extra features.

Or you can order here: http://tinyurl.com/StallOrder or watch now on BLINKBOX and FilmFlex. 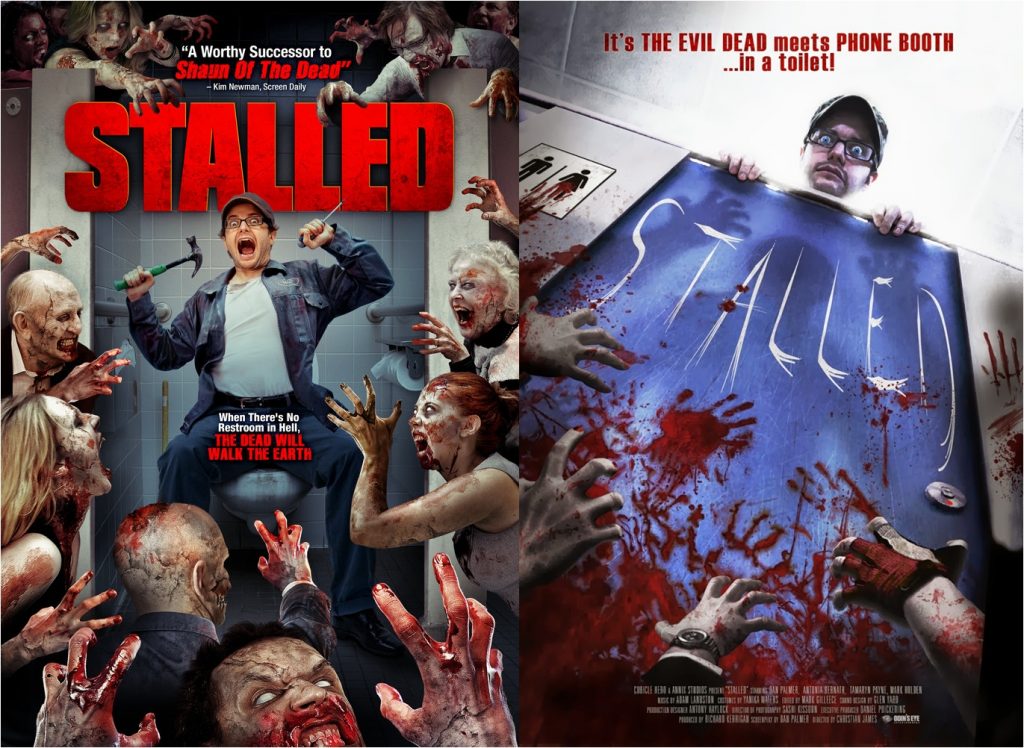