The Walking Dead continued to rock the post-zombie apocalypse world that fans know and love in the fourth episode from this season, “Indifference”. In The Walking Dead Season 4 Episode 4 we see what could possibly be the first major character departure of the new season when Rick throws Carol out of the prison group as a consequence for her actions earlier in the season.
After last episode’s final minute revelation that Carol had killed Karen and David and burned their bodies there was surprisingly little reaction from Rick. In the early stages of the episode Rick decides to take Carol on a run to search for medication and first aid supplies that the group can use to help fight the quickly spreading virus that is decimating the prison group.
Daryl, Michonne, Tyreese and Bob are off on a run to a nearby veterinary college searching for antibiotics, IVs and other medical supplies. Because Rick knows that they might not come back for a while, or at all, he thinks that searching some abandoned neighborhoods closer to the prison might get them some meds that can stave off the spread of the infection and save the lives of those already infected.
While clearing a house and rummaging for drugs Carol and Rick come across a couple, Ana and Sam. Sam has a dislocated shoulder and Ana has a bum leg from a previous injury at a refuge center. It’s interesting that she mentions the refuge center, since originally the group was trying to get to a supposed refugee center in Atlanta that didn’t exist.
Anna and Sam want to join the prison group, even after they are told about the illness rampaging through the prison. As a way to prove they can contribute to the group they offer to forage for food and medications while Carol and Rick go through some of the other houses in the area. Rick asks them the three questions that have become the price of admission to the group and agrees to let them come to the prison. He is against them going out foraging because they are in kind of rough shape but Carol thinks it’s a good idea for them to prove their worth before being allowed to join. 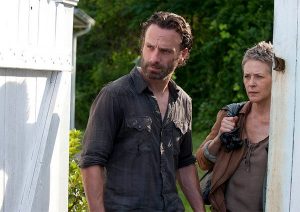 Rick and Carol trying to find meds and food in a nearby neighborhood.

They set Sam and Ana up with guns and a watch, telling them to be back at the house in two hours. However, while out scavenging Rick and Carol find fruit on the ground, an abandoned pack, and behind a garden gate they find Ana’s bum leg. They see two Walkers close by feasting on Ana’s body. Carol and Rick go back to the house to see if Sam made it back but after the two hour mark he is not back. Carol tells Rick they need to go, even though Rick wants to wait to give Sam a chance. Eventually though Rick gives in because he knows they have to get the medicine and food they found back to the other survivors.
As they are packing up the car to head back to the prison Rick finally speaks up about Carol’s murders of David and Karen. She insists that she was protecting the group and that as soon as they got sick Karen and David were already dead. She adamantly insists that she was acting in the best interest of the group and calls Rick out for abandoning his position as leader.
Rick tells Carol he can’t let her come back to the prison. He is afraid for her safety if Tyreese finds out that she killed Karen and he is afraid that she will kill anyone else in the group that she decides is a threat. He sees her actions as a threat to the group and to his family. They find another running vehicle and he starts to load it with gas and supplies for her. After a powerful conversation about how much Carol has changed and how strong she has become he tells her that she will be fine on her own.

Rick exiles Carol from the group at the end of Episode 4. How will Daryl and the others react to Rick’s decision?

As Rick is making the decision to kick Carol out of the group Daryl, Michonne and the others make it to the veterinary school after escaping the herd that forced them out of Zach’s car. They found another car at an abandoned gas station and managed to get to the school. There were plenty of Walkers in the school but it wasn’t completely overrun. The group slipped in and ransacked it. They found lots of antibiotics and medications as well as other medical supplies that the group at the prison desperately need. Some of the Walkers they run into are infected with the same virus plaguing the prison, and their bleeding eyes and mouths are pretty gruesome.
As the group becomes trapped between a small herd of infected Walkers and a group of Walkers who appear unaffected they are forced to break out some second floor windows to get out of the building. They jump to a small overhang outside the windows planning on running on top of the overhang to make it back to a safe area where they can jump down and get to the car. But as he jumps out of the broken windows Bob trips, and the bag he’s been clutching goes over the side of the overhang.
A swarm of Walkers waiting under the overhang grab the bag and nearly pull Bob off the overhang. Daryl, Michonne and Tyreese struggle to hang onto Bob as he fights for the bag. They tell him repeatedly to let it go but he refuses. Bob manages to wrestle the bag away from the Walkers but it spills open as it slams onto the overhang, revealing only a bottle of whiskey.
Earlier in the episode Bob revealed to Daryl that he feels that he is responsible for Zach’s death because he caused the shelf to fall over in the Big Spot store when he was getting a bottle of alcohol. It is implied that he is an alcoholic and struggling with that addiction in post-apocalypse world. He also mentions that he had been with two previous groups that fell apart and succumbed to Walkers and other threats.
Daryl asks Bob if the bottle of whiskey was the only thing he scavenged inside the building. When it’s clear that is the case Daryl makes a move to toss the bottle and Bob’s hand reflexively goes to his sidearm. Interestingly the only time that Bob has reached for his gun with any kind of urgency is when he appears to be drawing it on Daryl for starting to destroy the whiskey bottle.

Daryl, in one of his most badass moments of this season, squares off with Bob. Without a word he challenges Bob and makes it very clear that it’s not a good idea to draw on Daryl, or piss him off. Tyreese tells Daryl to back off and let it go, which Daryl does. But before walking away and getting the group out of there and back on the road to the prison Daryl gets nose to nose with Bob and tells him, in a gravelly voice that would terrify anyone on the receiving end of it, “If you take one sip before those meds get in our people I will beat your ass into the ground.” Definitely one of Daryl’s finest scenes this season.
Heading into the 5th episode of Season 4, “Internment”, it seems that the prison group is under siege from all aspects. The rapidly spreading flu is decimating the small population and putting the rest at risk. The prison defenses are ready to fall to the massive herds of Walkers attacking daily. They still have no idea who has been feeding the Walkers at the fence but it’s clear that there is another threat lurking. The Walking Dead Season 4 Episode 4 set a new ratings record for the show and judging by the teasers for the new few episodes Walking Dead fans are in for some big battles and big changes as the prison group splinters apart facing internal and external threats.
In Uncategorized by
Sonya Iryna
/
Leave a comment
Share: