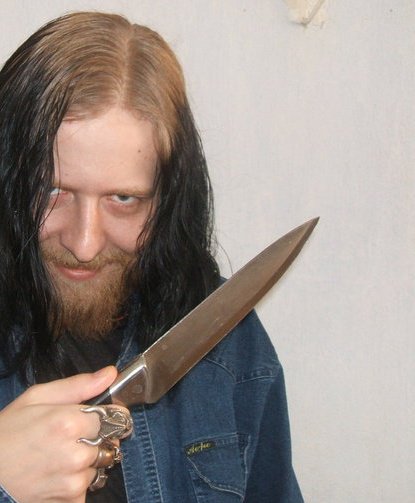 Tony Vilgotsky's Short Horror Fiction: "TREVOR" – Be Careful Who You're Friends With!

Joey spent his childhood in a normal school, where he wasn’t even a little bit respected by his classmates. He had no friends, had no one to spend time with and even had no one to talk too. Maybe that was the reason why Joey always gained very bad results in every subject he studied for. Everyone around him told him that he’s a douchebag, and that he will never amount to anything in his future life. He never had a girl. He was bullied by the “alpha” boys. All of this led to problems with his psyche when he was 14.
Because of that Joey was taken away from the institution and spent a year being home schooled. He felt much more comfortable at home where no one ever wanted to abuse him. Then Joey went back to his old school. The doctor who watched over him said that it would be useful for Joey’s recovery and return back to socialization.
Joey noticed a new boy in the class. His name was Trevor. Soon Joey and Trevor became friends. It was interesting for these two to spend time together. They often walked together and understood each other brilliantly. As like Joey himself, Trevor had no other friends among pupils. However, unlike his pal, he was never bullied by anyone. Joey always wondered why – since Trevor was as shy and physically smaller as he was.
At the age of 16 Joey was involved into extremely tough conflict. It happened when he showed a negligence in attitude to words of boy who was the leader of all those “alphas”. They caught up to Joey after the lessons and started to beat him. Meanwhile Trevor was passing by – he was going home. When he saw Joey being beat up, the boy picked up an iron rod that lay on the ground nearby. Then he went over to the bullies and beat the shit out of them. He didn’t kill anyone, but broke one guy’s arm. Joey was very grateful to him for this magic salvation.
After that, everyone in their school began to consider Trevor as a psychopath. When Joey asked Trevor later what his parents had done after that incident, his friend just smiled and didn’t say anything. Joey’s father then told his son that brutality is not a good way of life – and that Joey should not talk to Trevor anymore. His parents took him from school again – this time just to separate two boys from each other, and to avoid Trevor’s dangerous influence. Joey’s psyche wasn’t very good at that period. He suffered some fits and was often visited by a psychologist.
All this time Joey had missed Trevor very much. But when he finally came back to school again, his pal wasn’t anywhere to be seen in the class. Joey soon learned that he never even studied at that school. The boy was still amazed as to why everybody was telling him that Trevor had never existed? “Why should I believe them?” he thinks. “It’s not a good thing – to forget your friends”…