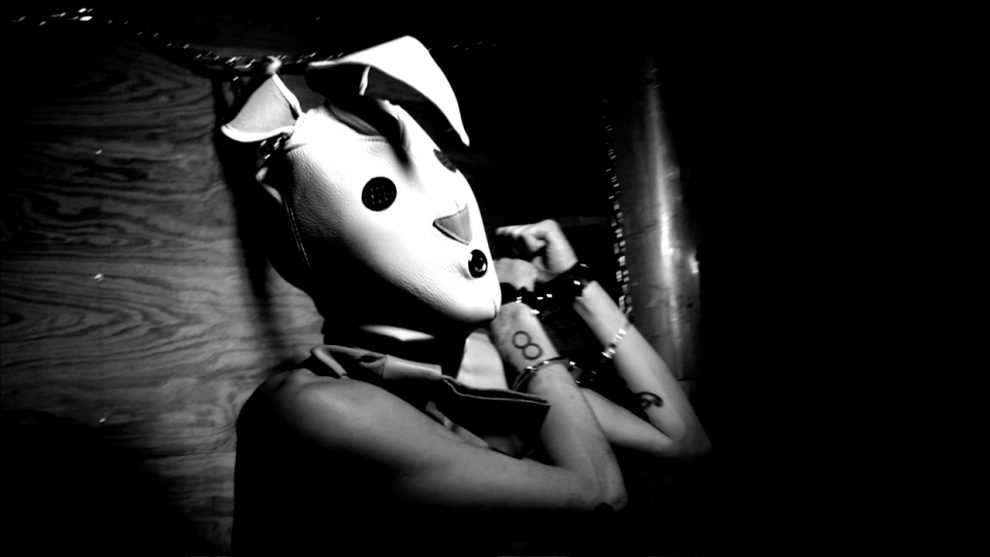 For a film that was banned in the UK for showing graphic scenes of sexualised violence, it certainly wasn’t as hardcore as I was expecting. Not once throughout the film did I think that this was worse than any other film in the torture porn genre. In fact, even some mainstream horrors such as Saw and Hostel contained scenes so much more sickening and disturbing than The Bunny Game. Adam Rehmeier has undeniably failed to create a film that could stand up against any other in the genre.
The film is set into two acts, the first lasting around 25 minutes and shows the present life of a young woman – ‘Bunny’ (Rodleen Getsic), who is addicted to drugs and whores herself out so she can fuel her addiction. The second act lasting just under an hour is a mixture of lengthy shots of Bunny screaming and short, choppy shots of her kidnapper –‘Hog’ (Jeff  Renfro), teasing her with S&M foreplay. This is what I didn’t like the most about the film, that there was no real connection between Bunny and Hog. Not only was there no rape scene between the two, but the S&M foreplay he was carrying out on her was not extreme in any sense, unless you find slapping and dry humping extreme of course. The acting of both characters was not too bad for what they had to portray and I have to admire Getsic for having all the torture done to her in the film, in real life. By not using what would have been outdated special effects due to the budget, the viewers can actually sympathise a little bit with what she is going through, as everything is authentic. However, this was the only interesting part about the film.
There was one aspect about the film that actually annoyed me all the way through, and that was the editing. As well as writing, directing and producing this film, Rehmeier also took full control of the editing which overall made the film look like a pretentious art student’s avant-garde, experimental film. From the very beginning, each scene is filled with vast amounts of shots all edited together in a very amateur way so that it will actually give you a headache. By doing this, he has made the almost none-existent plot even harder to concentrate on.
The only way this film could have been decent would have been if the Rehmeier made it 70 minutes shorter, and sold it to either Nine Inch Nails or Aphex Twin to use as a music video.