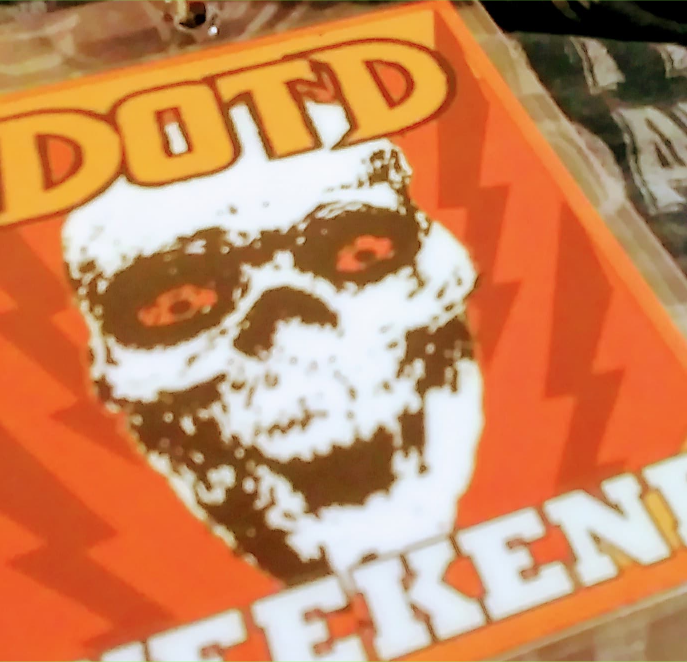 Let me begin with an apology; I had intended to post this article the Wednesday following the actual con, however I was sidelined with a horrendous case of upper respiratory con crud and then… stuff happened.

Days of the Dead is a large scale traveling convention series that is known for hitting several major US cities per year, including Atlanta, Charlotte, Indianapolis, Louisville, and of course, Chicago. Being local to the Chicago area, I’ve made my way to the Chicago area iteration of the convention several times and this year was no different in that respect.

Before delving into the details, I should preface this by saying that when it comes to fan conventions of any kind, I am spoiled. Terribly, terribly spoiled. The first ever such convention that I attended was Dragon*Con in Atlanta, in 2009. At the time it seemed massive, even when still constrained to only three host hotels, with dozens of interesting tracks to choose from, even more celebrity guests to meet and greet, and lots of fun parties and late night concerts to attend. It was difficult to find any other con that could live up to that — especially now that, for someone like me, Dragon*Con has become a bit uncomfortably large.

Enter my savior, Days of the Dead.

Days of the Dead does well to present the basics of any horror con, from a star-studded guest list to a costume contest and even late night karaoke party. This past year’s guests were headlined by horror master Clive Barker, along with Doug Bradley, Ashley Laurence, and a wily crew of Cenobites. The list was rounded out by bevy fan favorites like Bill Mosely and Linda Blair, as well as a number of guests hailing from the pro-wrestling industry, including Trish Stratus, Lita, and the man himself, the (now, sadly late) Mean Gene Okerlund. Celebrity guests are available for autographs and photo-ops, as well as featured panels, as part of the ‘Black Track’ — pretty much par for the course for any type of fan convention, horror of otherwise. 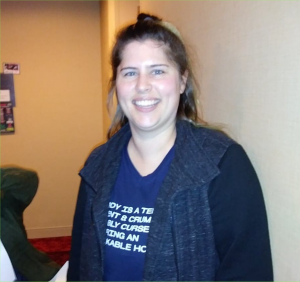 Also featured at Days of the Dead is the ‘Red Track’, an ongoing film festival that runs throughout the entirety of the convention. We’ve already discussed our favorite of the convention, Hunter’s Weekend, in depth, but there were several other notable films as well. Second Chances had a good showing, as well as Bong of the Dead; for these films, and several others, members of the cast and crew were on hand for short Q&A sessions following the film presentation. Also featured were blocks of horror shorts and foreign horror films; some standouts included Noctámbulos, a late night skateboarding horror adventure, the extremely atmospheric short Dentro Il Buio, and Presepe Vivente, a very funny Italian film that turns the trope of possession on its head.

Sadly missing from the film festival were the screenings of classic films that capped off 2017’s con; with many of the more revered horror films being twenty, thirty, even forty years old at this point, a wide swath of horror fans never had the chance to see them on the big screen. The 2017 late-night screenings of Aliens and Hellraiser were a lot of fun, and I would have liked to see more in that vein.

The absolute star of last year’s Days of the Dead in Chicago was the ‘Blue Track’, a series of smaller scale discussion panels featuring everything from Chicago’s home-grown ghost stories to indie filmmakers sharing their tips and tricks, and lots of fun and interesting topics in between. Blue Track maven Nathan Hamilton organized an inspiring line-up for the track that brought to mind some of my early experiences at Atlanta’s Dragon*Con, where I first encountered this sort of discussion panel.

Most conventions like to stick to panels showcasing their celebrity guests, helmed by an announcer or MC who asks a series of pre-approved questions to the actor, wrestler, or industry professional on hand that elicit a good reaction from the crowd. That’s all well and good — I’ve got nothing against celebrity panels at all and particularly enjoyed 2017’s panel with Jen and Sylvia Soska — but they are often overly large and impersonal. DotD’s Blue Track brings the action closer to attendees by involving them in smaller, more in-depth discussions on topics near and dear to the hearts of most horror fans. Nathan himself puts it best in saying: “Conventions will always shine a spotlight on our beloved horror icons. Programming like the Blue Track puts that spotlight on the independent artists who are the innovators and future of the genre who often struggle for visibility. It offers a choice; see your old favorites or come discover your new ones.”

Strangely missing this time around was a discussion of horror comics, typically hosted by Jim Lesniak of Voodoo Comics, a regular vendor and presenter at DotD Chicago. In one respect, it wasn’t too surprising; I’ve sat in on the panel a handful of times as its been presented and the material has been largely the same each time around, down to using the same multimedia presentation. Given the wealth of information available on the topic, it would seem a better use of the panel to narrow focus down to one or two aspects of the genre each year. A look mainly at underground comics one year, a look at book-to-film or film-to book the next — something to inject a little variety. I do hope to see the panel back next time around, perhaps with a fresh outlook. Lesniak did, however, present a panel on copyright issues for artists. 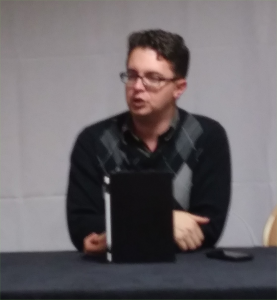 Sorry for the blurry photo, Adam.

Adam Selzer, a local Chicago historian and another repeat guest to the con, hosted a panel on Chicago area ghost stories. Known for the ghost tours he runs in the city, Selzer recognized the many different stories con-goers must have heard on the topic and let panel attendees ask his opinion and knowledge on favorite local legends, always to be greeted with a wealth of information on the topic. The only near-miss of the session was the lack of large scale media presentation; the Blue Track was (and has been seeming since its inception) relegated to a relatively small meeting room with very little by way of technology available. Selzer was able to show off a few interesting photos via his personal tablet (and what I wouldn’t do to get my grubby paws on those archival photos from Graceland Cemetery, damn!), but there was no large scale screen available so that those in the back might get a good glimpse.

Problematic tech was something of a theme, as Lilith Lovecraft, who presented a panel on Horror Hosts, was also unable to use her prepared media. There was a similar occurrence in the prior year’s convention for the Horror Host panel, which had also been helmed by Lilith and her counterpart on Crimson Theater, Doctor Destruction. Lilith’s solo panel was informative and interesting — particularly coming from the perspective of someone who might not be considered the ‘headliner’ horror host but is just as integral to the series — but could have been greatly improved had her media presentation been able to go off without a hitch.

In terms of the film industry, the Blue Track hosted panels on both Indie Filmmaking and Women Filmmakers in Horror, both of which garnered larger crowds and presented a good deal of information from indie horror scene darlings including Brooklyn Ewing, Amy Taylor, Shayna Connelly, and Jessie Seitz. Filmmaking tips and tricks is enough of a draw that it could be a track in and of itself — hint hint, nudge nudge — and the panels saw the small meeting room crowded full of eager attendees, many of whom were taking notes.

Last but certainly not least, the Blue Track meeting room hosted a burlesque show, the Creepshow Peepshow. While a fun time was had, the size of the room presented some difficulties. The same could be said for the Red Track screening room, which was often packed to the gills for featured screenings. 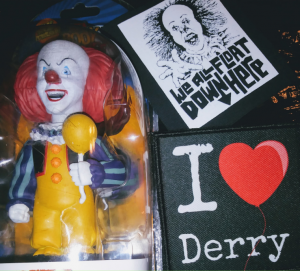 Can’t forget the goodies! A few treasures gleaned from the dealer’s room.

It was announced recently that the Chicago con will be moving from its longtime host at Chicago Marriott Schaumburg, though the new location has not yet been revealed. This comes as welcome news to some, as the larger scale panels and presentations at this location were relegated to an outdoor tent that often required schlepping past the pool and down a staircase in inclement weather and occasionally inebriated states. This comes on the heels of a change in management, so to speak, as Days of the Dead went through a bit of a shuffle itself as an entity within the last year. Sadly missing from upcoming DotD showings will be Nathan Hamilton, the aforementioned mastermind of the Blue Track I’ve come to love so well. Due to a few personal hiccups, Nathan will step down from running the Blue Track for several DotD cons, with Brooklyn Ewing (She Was So Pretty, etc). Brooklyn was a delight in several of the Blue Track panels at the last Chicago con, so we have total faith in her efforts, but will miss seeing Nathan around and wish him all the best for the future.

Days of the Dead puts on a great show each year and 2018 certainly proved that. There is a little room for improvement, mainly in terms of available space for anything that doesn’t involve celebrity guests — the Blue Track and the Red Track deserve as much attention as the Black Track — and more reliable technology available for media presentations. With some changes on the horizon for the next Chicago con, it will be interesting to see if these issues are taken into account. I do look forward to next year’s convention, and hope to see you all there — and I promise, I’ll bring a better camera!
In Author: dew by
amanda
/
Leave a comment
Share: