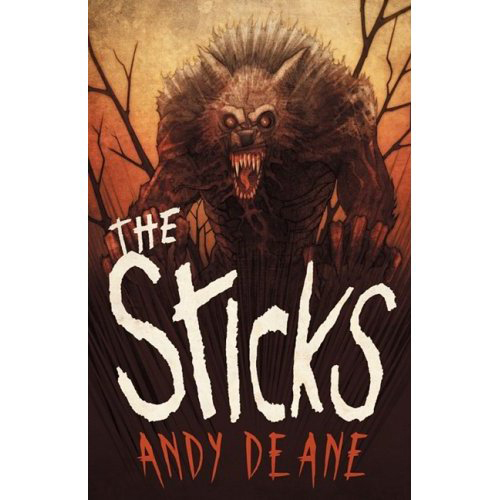 There are certain things you expect to find on sale when you go to see a band play. Albums, obviously. T-shirts, of course. Bags, buttons, patches? Sure, why not! But books? Not so much. Finding a stack of horror novels on a band’s merch table may seem a little strange, but that is exactly how I came across The Sticks, a novel written by Bella Morte frontman Andy Deane.
The novel reads like a horror movie put to the page: a man is kicked out of a party where everyone seems to be taking themselves too seriously, and abandoned by his girlfriend to boot. When the girl in question seems to vanish, he and a fellow spurned partygoer set off to find her and get a lot more than they bargained for in theprocess as they nearly run down werewolf on a country road. Told from the protagonist’s perspective, thenovel is written in the first person, and the colorful language and thought process of Brian, the lead character, make the narrative both memorable and believable. The narrator is likable and carries a somewhat everyman feel, forced to deal with the hassles of weird neighbors, his missing girlfriend’s snobbish friends and even a car that proves far less than reliable. Brian is an ordinary guy – and a horror movie fan – caught up in some extraordinary circumstances, forced to fight for his life against an evil that no one else could possibly believe. Full of film references, the novel will be a delight for any horror fan to read.
Key to the novel’s success as a werewolf story is the fantastic description of the actual transformation. We’ve all seen a man change to a bloodthirsty werecreature in film and television, but it has rarely been put to page with such masterful description. Cracking bones, twisting flesh, a grizzled muzzle forcing its way forward: it just doesn’t get much better than this! The author doesn’t shortchange on the gore or bodycount either. This is a horror novel and that fact is never forgotten. The werewolf in question is a vicious, ravenous beast and it leaves a bloody trail of broken, bitten bodies in its wake. The novel is completely unapologetic in its use of gore and violence – just the sort of attitude needed for a great horror story.
Apart from being a little heavy on the use of similes, there is not much to complain about. The solid storyline would prove great fodder for a film, particularly so as lacking of decent werewolf films Hollywood has been since… well… just about forever. Deane’s writing career is just getting started, with only a few novels under his belt; if the others are as good as this one, we may be looking at a new force to be reckoned with in horror fiction.
Title: The Sticks
Author: Andy Deane
Length: 210 Pages
Publisher: Delerium Books
Publication Date: April 2009
CHECK PLUS: Fun story, likable characters, great horror elements
CHECK MINUS: A little overboard on the use of simile
OVERALL RATING: A-